The most versatile model in the world.
- The Thao

Beginning her career in Canada, Charlie Riina is recognized throughout the world as one of the most desired glamour models of today. She has made several appearances for Playboy magazine (to include specials editions and features in Canada, Mexico, and Venezuela) and in the past few months she has appeared on the cover of Playboy's Poland, Slovakia, Czech Republic editions. She has been given the coveted title of "Playmate" (featured as the centerfold in the magazine) on more than one occasion. These achievements alone have solidified her reputation as an international model and marketing image.

In addition to these prestigious credits, Ms. Riina has modeled for Esquire Latinoamerica, Lifestyle for Men magazine, For Guys Magazine, and FHM (Canada, Taiwan, and Singapore), including a multiple-page feature in the special international edition "Girls of FHM". As a representative of Canada. Ms. Riina can frequently be found wearing the popular designs of Zeugari Beach Wear, modeling for the company's website, for campaigns, and on the company's social media pages as one of their most well-known spokesmodels.

Charlie Riina Is The Hottest Girl I've Ever Seen In My Entire Life!
- Hollywood Tuna 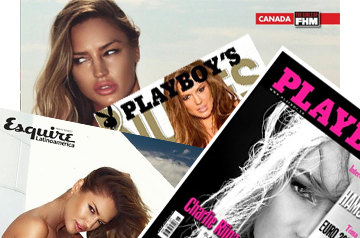